The letter from Hogwarts has arrived!

If you follow me on my Facebook page and Instagram, you know that I am a Harry Potter fan.
No surprise then, when I found out about the Harry Potter exhibition in Brussels, I jumped on the tickets the day they were available. 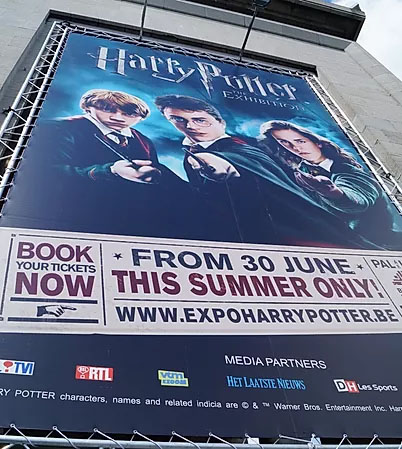 The expo is now prolonged and you can visit it till the beginning of November, but before you do, here is a short summary of what you can expect.

When I went on the website few months ago, there was not a lot of information.
Except the number of people that have visited the expo over the world and how fantastic it is.
They were also advertising it as an interactive experience.

Enough for me!
I chose 31st of July, as it was Harry´s b-day! I thought, maybe they do something special for this occasion (nothing special was prepared :p ). 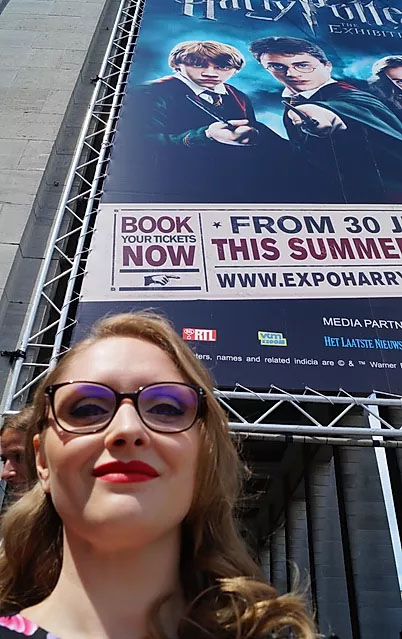 I thought long about what am I going to wear! Yes, yes, always the problem ;)
In the end I chose this beautiful Vivien of Holloway dress matched with T-strap shoes and Woody Ellen´s handbag (always the best choice ;)). 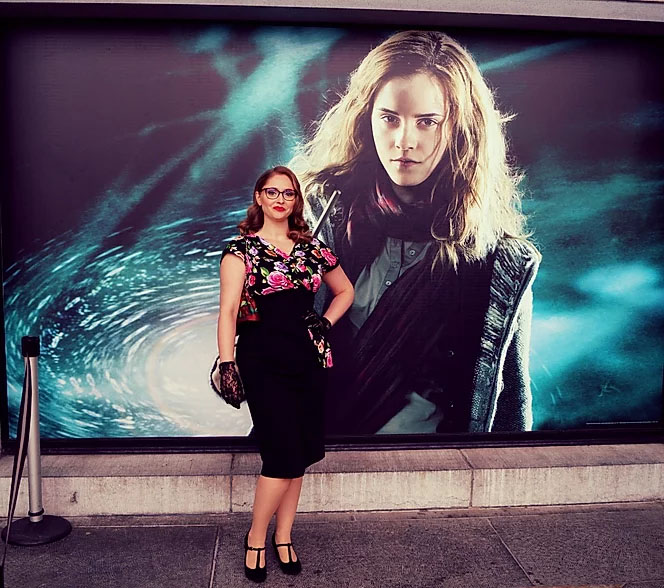 The day itself I was like a little kid that is sat in front of the bag of goodies and cannot touch them!
All because of the looooong line and huge amount of time spent in it, before we could enter.
The time we spent waiting was, unfortunately, longer that the time we spent inside.
That´s the first bummer!

Once could´ve thought that buying a ticket with an hour on it, will speed up the whole thing, but no. You cannot be more wrong than here…

The only interaction at the entrance (except for people checking your tickets), was a picture taking stand, where you could choose your house and a wand.
After that, the only thing you could admire is the posters from all the movies and other people.

Once the doors opened you were greeted by the short show with selected scenes from the movie and afterwards welcomed by the Sorting Hat.

The first thing that you notice once passing the Sorting Hat and the beginning of the exposition, is that it is horribly dark inside! It is tiring at some point, as some of the things (like moving pictures) are super bright.
I didn´t even realize for a second that we are at the train station, just seconds after the train arrives at Hogwarts.

After passing the Fat Lady trying to break a glass with the power of her voice, we arrive at the Gryffindor Tower and from there we can explore the world showed to us in the movies.

The pictures will follow in a gallery but I would like to write first about the interactive side of this expo.
It will be very short. There were 3 places that you could interact with the props:
-Sorting hat at the entrance (there were only 4 people out of 30 that were randomly chosen to sat on a chair. Sad, sad me…)

-Stand with mangragoras- you could pick them up and they would scream.

-Sort of quidditch game, which looked more like a basketball and I suck at it ;)

The rest was static.
I must admit that I really enjoyed seeing all those props and costumes used in the movies but, as usually in real life, the ads are better than live version, so a main hall of Hogwarts with floating candles in the air was the most disappointing part of it all.

I think the part I liked the most was the Hagrid´s hat, where you could sit down on his chair and admire dragon´s egg.

I leave you now with the pictures and thoughts if it is worth to spend 20€ for 30 min of Harry´s experience ;)