Crazy Horse Paris is a legendary place, since it opened in 1950 continually attracts enthusiasts of cabaret and burlesque.
For it´s 65th anniversary they took care of selling all the ´special´shows till the last seat!
Except for the amazing Les Crazy Girls, one woman, a living legend, was invited: Dita Von Teese.

If you follow my Facebook Page , you know this person is my huge inspiration. Not only because she is gorgeous, intelligent, strong woman, who loves retro style but mainly cause, despite being world-wide famous, she still remains humble, professional, always trying to overcome her fears and limits.

As costume designer- Alexis Mabille said in an interview: “We spent last weekend in my studio, just the two of us, sewing sequins onto her tuxedo. I can’t think of any other star who would be cool enough to do that.”

Therefore when I heard that she is coming to Paris, I knew I had to take the chance to see her and get her book signed. Not thinking too long I booked a ticket for the first Saturday´s show. That was the best tactical move ever but I will talk about it later.

Dita performed in Crazy Horse already twice in 2006 and 2009, turning some of their traditional acts into her own, glamorous signature pieces.
This year she returned with 2 acts previously performed on the iconic stage: Tees´ing and Le Bain Noir, one additional one where she joins Les Crazy Girls on stage- Peek-a-Boo and the most amazing of them all: Undress to Kill, where the public stops breathing for a while and stays in awe during the whole show.

I booked my trip just for one night, as sightseeing was really at the bottom of the list for this adventure, so after arriving to the apartment just next to the Eiffel Tower, I started preparing myself for the show of the lifetime. 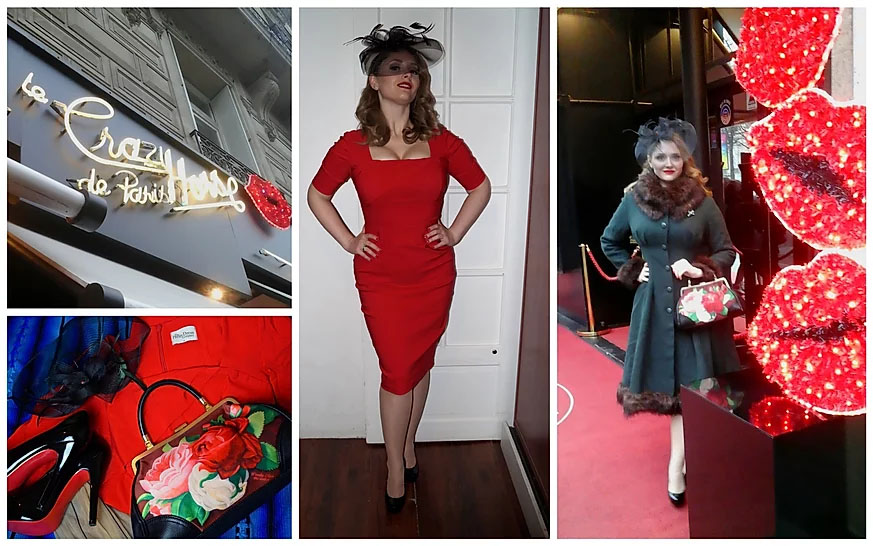 Arriving to the Cabaret way in advance, I had time to take some pictures outside but it´s the inside that blew me away! The red velvet seats, dimmed lights, crystals and the cosines really make you feel like you entered a magic place and something incredible is about to happen.
After being sat down at the table, the waiters started bringing champagne bottles and the bubbles started flowing.

From the beginning you can feel this luxurious, glamour atmosphere.

A minute before the show public goes quiet. The curtain goes up and the first act God Save Our Bareskin, performed as an opening act since 1989, pushes us into the chairs like the fastest car. 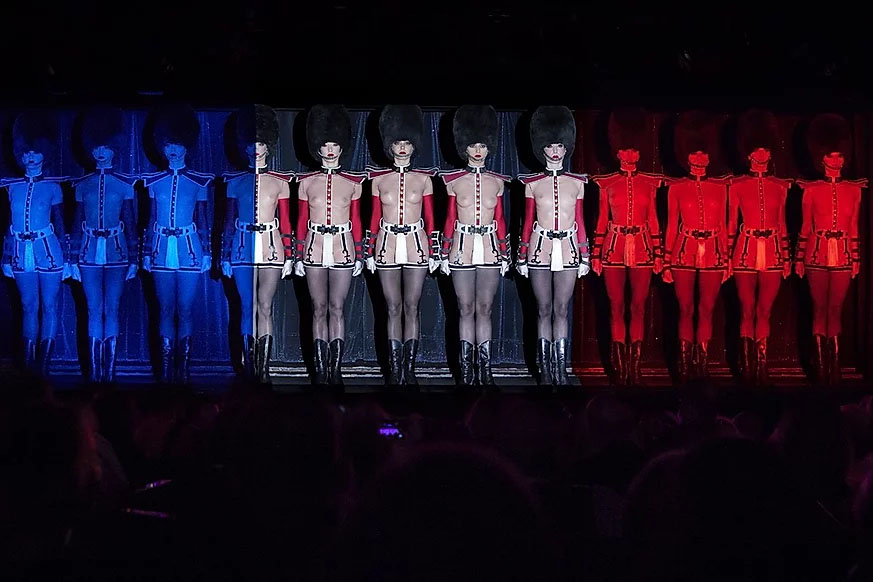 But it is Dita´s first appearance that takes the crowd up of their seats. Here she is, divine, alabaster goddess. Coming out of the mist of a cigarette smoke dressed in a in Alexis Mabille’s black sequin tuxedo and top hat. That´s the moment when you realize that this woman is the master of the art of seduction and could seduce you just by lifting her smallest toe. In my opinion that was her best act. Perfection in its best form, simplicity and femininity I´ve never seen before. 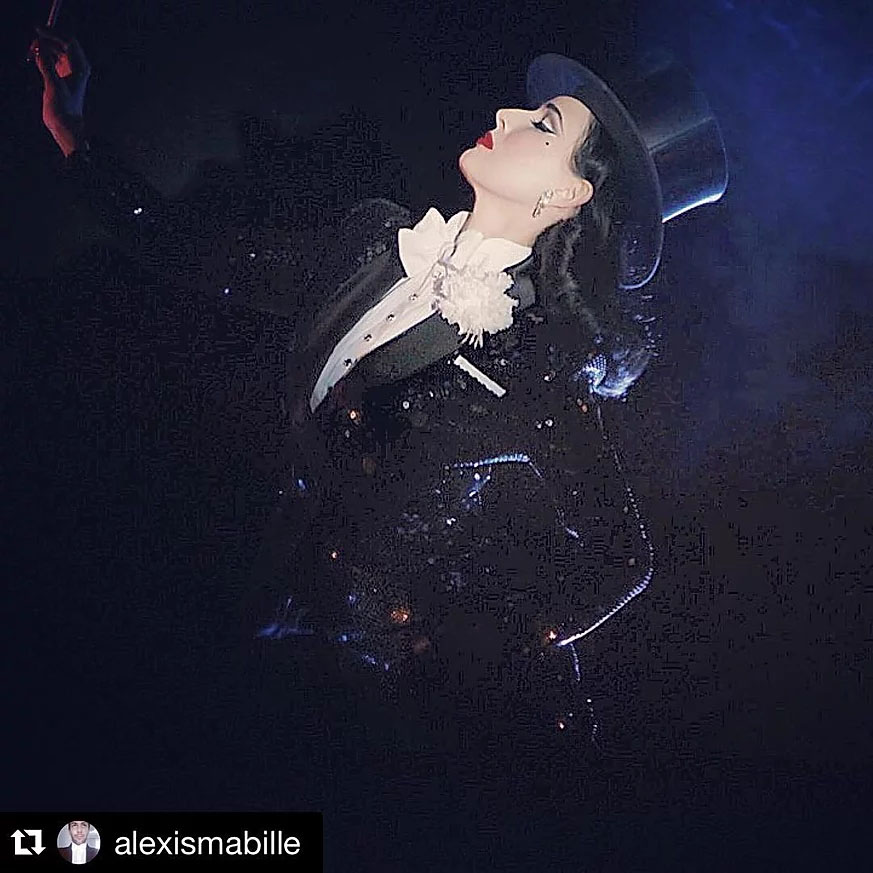 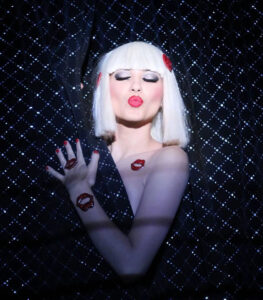 Dita joins other dancers for a Peek-a-Boo act, swinging around her hips (how do they do it on those insanely high heels?!).

Her performance of the Le Bain makes public go crazy! As during every burlesque performance, we screamed louder and louder for her to get rid of stockings, dress, corset up to the point where she pours water on her sparkling body, taking a bubble bath in a bathtub covered fully in Swarovsky crystals.
She admitted in one of the interviews that she decided to perform Le Bain, instead of the Martini Glass act, because of the size of Le Crazy Horse. The glass would fit in but she would not be able to move up in it.
In my humble opinion the bathtub is even more exciting and gives more opportunities to move while undressing.

The last act was a feast for eyes! Undress to Kill was made especially for those 33 shows and I can say made to measure for Dita, as all the light projections were fitting her body like a glove!
It was purely artistic performance. No the art of stripping but the opposite- dressing up a naked body in the animations of such high quality, that even painters would have troubles getting them right!
Dita was ´only´ positioning herself on the stage, letting the light do the rest of work.
I read last week in Vouge that this act was particularly difficult for her, as it was the first time that she was completely naked and thinking that moving one cm here or there could reveal it all, was pretty challenging.

The 5th time we see her on stage with all the Crazy Girls in You Turn Me On. Her stunning Ralph & Russo sequin gown with strategically placed beads, made me think of Marilyn Monroe´s dress in Some Like it Hot. 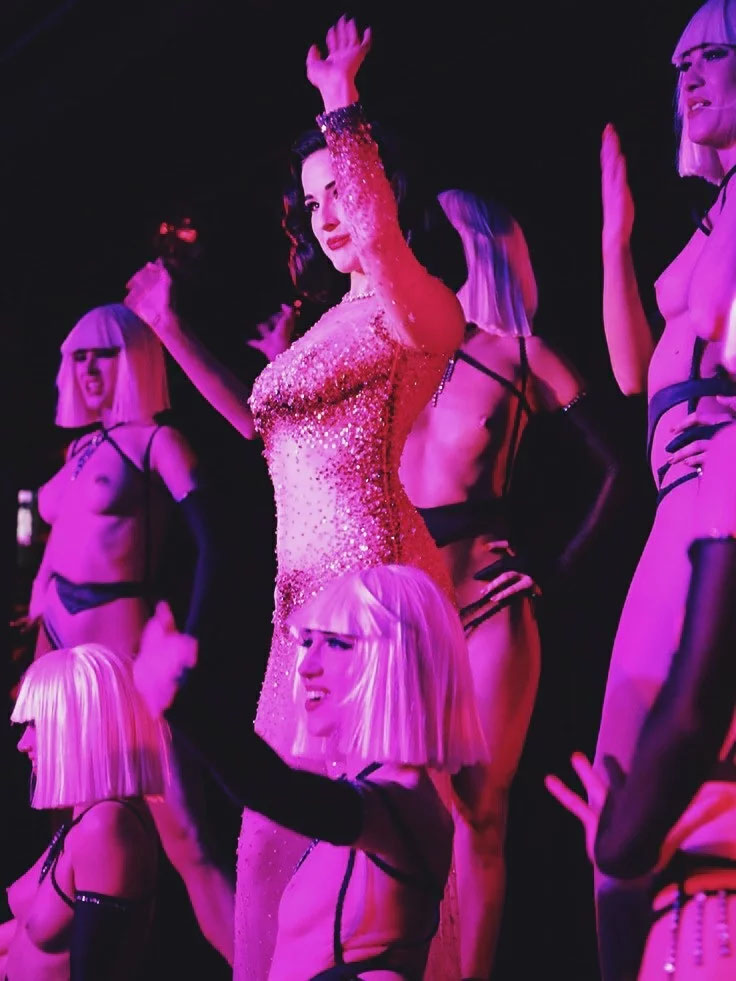 This show was not what I expected at all, it was more spectacular that I could even dream off!

The next day brought even more excitements! And here is why buying a ticket for the first Saturday was such an awesome idea: Dita was meeting with fans and signing her book for only limited amount of time : 2 hours! It was the only event like that during her almost 3 weeks of performing in Paris!
I was over the moon!

On the official website of Crazy Horse, the information said that the ticket holders would have a priority and indeed that is what happened.
Organizers were walking along the line and checking if we have tickets. Who had none, was sent at the end of the line. We spent over 2 hrs waiting to get inside and the 40 minutes inside to get maybe less than 3 minutes of Dita´s time. From what I have heard and saw, many fans did not get in at all. I consider myself super lucky to be able to exchange few sentences with this amazing woman!
To me it is like meeting Lauren Bacall or Rita Hayworth or Marilyn Monroe! The dream come true! 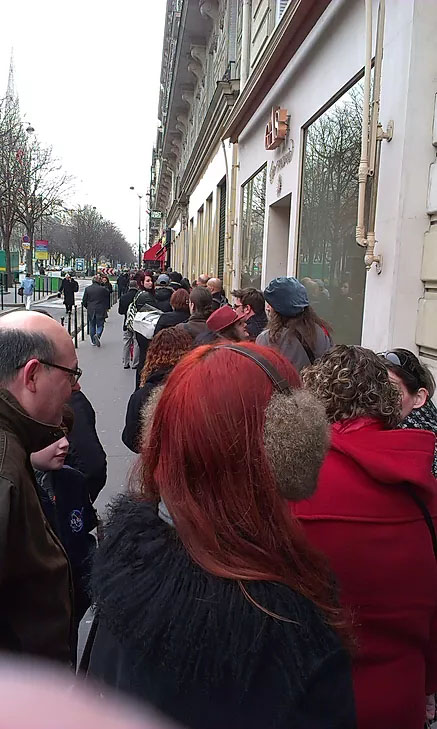 The first second, before she opened her mouth to say hello we looked at each other and I saw in her eyes this deep wheel of knowledge and experience, like you see sometimes in the eyes of people that saw and lived a lot. Her voice is shy and soft and she reacts super cute to the compliments, like she does not expect them at all. 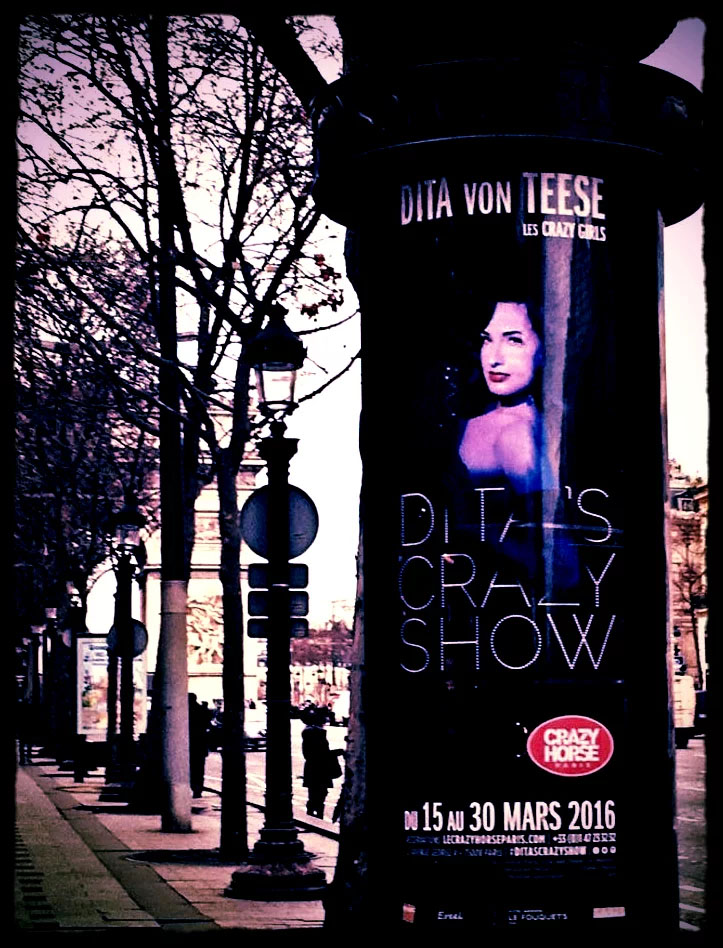 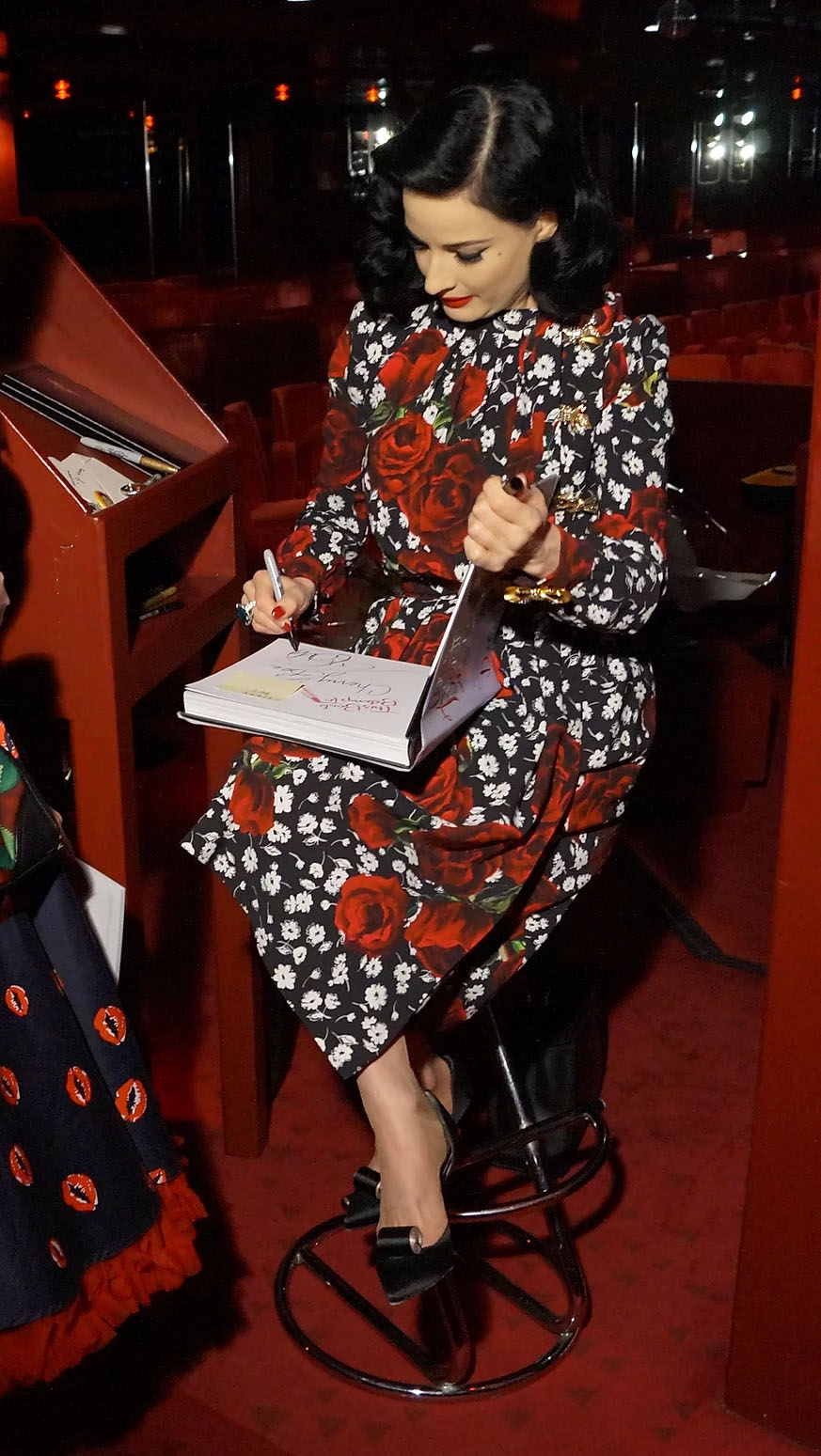 The last surprised that happened to me was a tons of compliments from Crazy Horses´ manager about my outfit and her request of me posting and tagging the pictures with Dita on Tweeter account, so she can re-post it on their own, official one.

That just lifted me up above the clouds again and indeed the re-post is there! <3 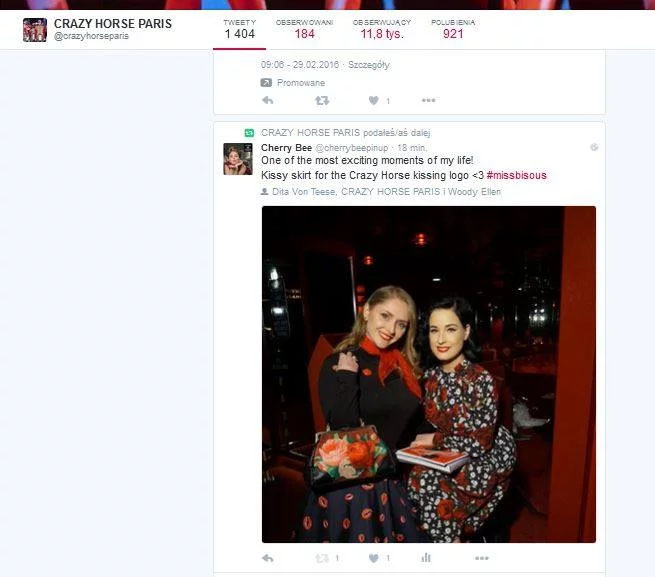 Some more pictures underneath and if you feel like taking a walk with me through Parisian streets I invite you to grab my hand and let´s go: